New Delhi: Swati Narayan, a research scholar and an activist with the Right To Food campaign, recently mapped the inclusion of eggs in mid-day meals in schools and anganwadis across India using government data and media reports. The map, which looks at possible links between political ideology and the provision of eggs in these meals, was released on July 8, 2018. 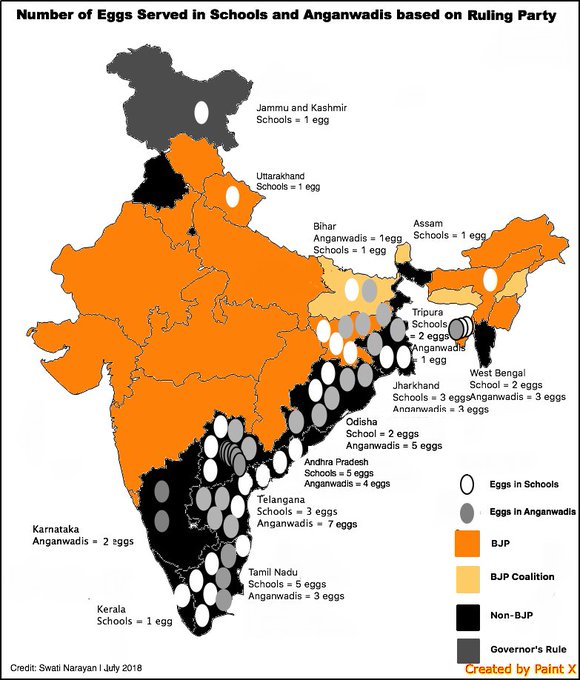 Some non-BJP states too (Punjab, Mizoram and Delhi) do not provide eggs in mid-day meals. However, BJP states are most likely to resist the inclusion of eggs for reasons related to the sentiments of vegetarians.

In India, 7.5% children under five years of age are severely wasted–a rise of 1.1 percentage points from 6.4% in 2005-06, according to National Family Health Survey 2015-16 data. All the experts IndiaSpend interviewed were of the view that eggs included in the mid-day meals of children could be a critical factor in combating malnutrition.

“Eggs will be helpful in addressing malnutrition among kids because scientific research shows that animal-based protein is better than plant-based protein,” said Mansi Patil, a public health nutritionist and metabolism clinical dietician at AshaKiran Hospital, Pune.

Though some states in India had introduced mid-day meals earlier, this was universalised only in  2001. Eggs were first served in mid-day meals in Tamil Nadu in 1989, when the state was governed by the Dravida Munnetra Kazhagam (DMK). The initiative started with one egg every two weeks and then was stepped up to one every week.

So why are administrations in BJP governed states–some of which, like Gujarat (39.3%) and Madhya Pradesh (42.8%), report a significant percentage of underweight children–not serving eggs in mid-day meals?

Officials in BJP governed states interviewed by IndiaSpend said they were concerned about offending the sentiments of vegetarians. “In Gujarat, most of the population is vegetarian,” said RG Trivedi, commissioner (mid-day meal scheme) in Gujarat. “Additionally, we provide pulses daily in mid-day meals as protein-rich food, hence we don’t serve eggs.”

Trivedi is correct–61% of Gujarat’s population is vegetarian, according to the latest available census data on food habits. This, however, is not true of the average Indian–70% of Indians eat non-vegetarian food.

“You can compare protein content of vegetarian and non-vegetarian foods, but the quality of protein in eggs is higher than others according to the protein digestibility corrected amino acid score (PDCAAS),” said Purnima Menon, Senior Research Fellow at the International Food Policy Research Institute (IFPRI), Delhi. PDCAAS is a tool to evaluate a particular protein’s quality based on human requirements and how they digest it.

Non-BJP states avoid eggs too, but BJP states most resistant

IndiaSpend investigations found that non-BJP states that do not offer eggs in mid-day meals were more constrained by the lack of resources than religious or cultural sentiments.

“Non-BJP states such as Punjab, Delhi and Mizoram also do not provide eggs. And Jharkhand, a BJP majority state, does,” said Sinha. “But, in states like Gujarat and Rajasthan, you cannot even talk (about providing eggs) for the fear of hurting upper-caste Hindu sentiments. Over the years, activists have been demanding eggs, but there is more resistance in BJP states due to cultural issues.”

On April 22, 2018, the ministry of health and family welfare set off a controversy when it tweeted a stock photograph that seemed to indicate that a vegetarian diet is the only way to stay healthy. The tweet was later deleted, as Scroll.in reported on April 23, 2018.

Manisha Chachra, a research scholar in political studies at the Jawaharlal Nehru University who has studied the Hindu right-wing, explained the importance of sattvik food in its ideology. “The BJP is an affiliate of the Sangh Parivar, which ideologically follows certain upper-caste Hindu beliefs as characteristics of Hindutva,” she said. “One of this is the sattvik diet, which excludes non-vegetarian food, onion, and garlic. There is a bigger dietary politics to this kind of exclusion (of eggs).”

In Delhi, the Aam Aadmi Party (AAP) government has not been able to fulfill its promise of boiled eggs as part of the mid-day meal scheme for school, according to this April 9, 2018, report by India Today.

Sinha’s argument about the need for more resources to provide eggs can be corroborated by Arunachal Pradesh’s 2018-19 mid-day meal policy. “Green leafy vegetables and fruits are available in rural areas with minimum prices and these are important items included in the menu, but eggs are not available and unaffordable,” it said.

The north-east has a particular problem. Eggs are largely unaffordable here because there are free poultry industries, and this pushes up the price of procurement, said Narayan. “If the central government wanted, it could have provided funds to all states for providing eggs, but it did not,” she added.

Former union health secretary K Sujatha Rao told IndiaSpend that costs are a major concern in the inclusion of eggs in mid-day meals. “It would be ideal to have village communities encouraged to develop hatcheries under the National Rural Employment Guarantee Act scheme and have eggs provided to schools and anganwadis,” she said. “These interventions should be decentralised and communities should be more involved rather than only the government.”

The other view: Introduce eggs with caution

Some dieticians advocate caution in the push for eggs to be included in mid-day meals. “We should ‘introduce’ eggs rather than include them,” said Mansi Patil. “If children are malnourished and we suddenly introduce eggs (into their diet), it may have a negative impact on their bodies. So let’s say we should start with 2-3 eggs a week and then slowly increase (the numbers). We need to realise that a body needs fats and carbohydrates too. There needs to be the right mix of nutrients.”

Patil added that the number of eggs that need to be consumed depends on the kind of malnutrition a child suffers from and what kind of metabolism her body has. “In severe acute malnutrition (SAM), as opposed to moderately acute malnutrition (MAM), we cannot introduce eggs right away. We need to focus on carbohydrates and energy first so that the body slowly shapes us to be able to take protein.”

Dipa Sinha, assistant professor, Ambedkar University, and an activist with Right To Food campaign, however, said that this cannot be a reason to deny eggs to children. “The overall proportion of SAM kids is low so that cannot be a reason to not provide eggs,” she said. “For SAM kids, there is an established protocol, where they need to be taken to the hospital by anganwadi workers and treated accordingly because they are given a proper diet.”

Animal rights activists who advocate vegetarian food in the context of cruelty against poultry birds argue this differently. “Chickens used for eggs are among the most abused animals on the planet,” wrote Bhuvaneshwari Gupta, a former campaigner and nutrition adviser with PETA India, in June 2015 for the Huffington Post. “Most are forced to live their entire lives in an area smaller than the size of an iPad screen. Their beaks are typically cut off with a hot blade to prevent them from pecking each other in frustration, because the industry simply won’t give them more space.”

Narayan agreed that the poultry industry needed better standards of hygiene and should be more aware of animal rights. “However, that cannot be a reason to deny eggs to children,” she said.

(Saha works as media & policy communications consultant with the Policy & Development Advisory Group, Delhi. Starting September 2018, he will be pursuing his Ph.D. in International Development at the Institute of Development Studies, University of Sussex, UK.)

We welcome feedback. Please write to respond@indiaspend.org. We reserve the right to edit responses for language and grammar.