No, vegetarianism is not growing in India

Barring Rajasthan and Punjab, the share of meat-eaters has risen in all the states in India in the past decade, with Delhi showing the highest increase

New Delhi: Food and politics have never been more entangled in India than over the past few years. Violent vigilantism has claimed the lives of suspected beef-eaters and even people in the livestock trade. In some of these instances, police action has been first initiated against the alleged beef-eaters rather than on the murderers. Other forms of vigilantism have led to the enforced shutdown of meat markets in entire cities during major religious festivals.

Such incidents seem to suggest that rising religiosity has also led to rising vegetarianism in the country.

But a Mint analysis of data from two successive rounds of the National Family Health Survey (NFHS) conducted in 2005-06 and 2015-16 shows that vegetarianism has in fact been on the decline over the past decade.

Across all but two states— Rajasthan and Punjab—the share of meat-eaters has risen over the past decade (charts 1a and 1b). 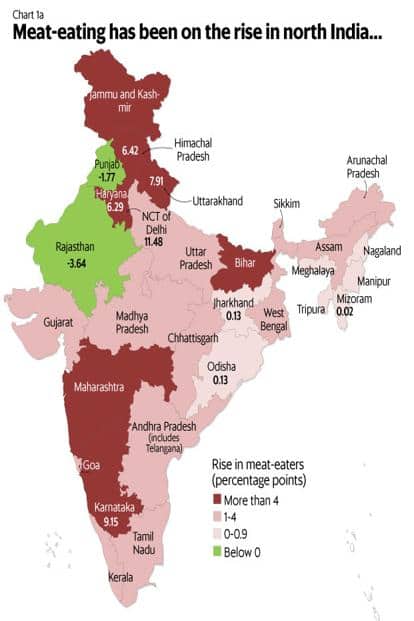 While Delhi shows the highest increase in the share of meat-eaters, several other northern states such as Haryana, Himachal Pradesh, Jammu and Kashmir, and Uttarakhand also show high rates of increase.

This increase is partly explained by the fact that they had low meat consumption to begin with.

Karnataka, which was an outlier among the southern states in terms of meat consumption, seems to be catching up with its neighbours, showing a considerable increase in the consumption of fish, meat and eggs. If we consider the change in vegetarianism (excluding egg consumption), the largest decrease is observed in Haryana at 11.1%.

Women lag men in the consumption of meat and eggs, the data show. As of 2015-16, 30% of women were vegetarian, as compared to 22% of men. However, women seem to be catching up with men. Over the past decade, meat-consumption and egg-consumption has increased faster among women than among men. This augurs well for India’s fight against malnutrition, given that the nutritional status of women is a key determinant of the nutritional outcomes of future generations (chart 2).

It is worth noting that the rise in consumption of eggs, meat and fish has occurred despite a rapid increase in the prices of these protein-rich food items over the past decade, suggesting that rising incomes have allowed Indians to diversify their diet and increase their protein intake.

The data suggest that the poorest classes have largely depended on eggs to diversify their diets.

While egg consumption has risen across income classes, it has risen the most among the poorest wealth quintile (chart 3).

Among social groups, meat consumption is the highest among Muslims and scheduled castes and scheduled tribes (SCs and STs). More than 80% of SCs, STs and Muslims are meat-eaters.

Among the general category (including upper castes), this proportion is much lower at 57%.

The data shows that the palates of Indians remain divided along the lines of caste, region and religion.

But it also shows that a process of convergence is underway, with rising incomes allowing people to eat and experiment beyond their traditional diets.

Arjun Srinivas is a recipient of the Mint-Hindustan Times-HowIndiaLives Data Fellowship 2018.