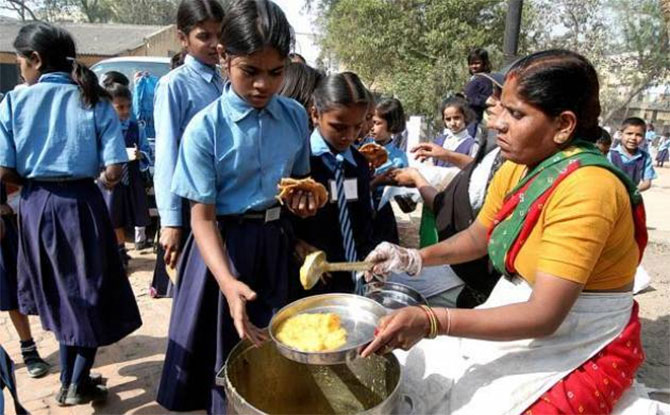 A controversy has erupted over the midday meal served to school children in Karnataka by the Akshaya Patra foundation with the state government directing it to include garlic and onion in the food.

The foundation, a wing of ISKON, a spiritual organisation, has been feeding 1.6 million children (in the country) ‘satvik‘ food that did not include onion and garlic in line with its principles.

Opposing the move, foundation trustee and former Infosys CFO Mohandas Pai alleged that some government officials under the ‘influence of vested interests’ were playing mischief to include onion and garlic in the menu.

He sought the intervention of Chief Minister H D Kumaraswamy to resolve the issue.

“Akshaya Patra Foundation has been feeding midday meals as per Union government’s standards. Now it is obvious that some officials under the influence of vested interests are playing mischief for reasons all known,” Pai told PTI.

A senior government official associated with the midday meal programme said the state food commission officials had visited various schools and suggested addition of onion and garlic for improving the taste of the food served to children.

“The commission has made this recommendation to us and hence, we have sent a notice to the foundation. We are awaiting a reply from them,” the official said.

An associate of Akshaya Patra Foundation Kulshekara Chaitanya Dasa said the foundation had received a notice from the government with a direction to follow the menu prescribed by Karantaka Food Commission.

In view of the instruction, the foundation had so far not signed the annual MoU for 2018-19 with the state government for feeding 4.43 lakh children in Karnataka, he said.

Foundation’s Strategic Communication and Projects Head Naveena Neerada Dasa said it was their constant endeavour to contribute to the government’s effort in promoting good health and nutrition amongst children.

“Akshaya Patra is committed to serve quality, hygienic and nutritious food to schoolchildren every day and implement Akshara Dasoha, the flagship midday meal programme of government of Karnataka,” Dasa said.

Bharatiya Janata Party leader and actress Malavika Avinash slammed the government for issuing the direction to include onion and garlic, saying it was an ‘uncalled for’ intervention.

After all these years of appreciation for the foundation’s food, it was quiet surprising to see the Janata Dal (Secular)-Congress government getting into the nitty-gritty of the ingredients going into the menu, she said.

“Since when did the government start worrying about the ingredients that are used in satvik cooking as long as food is tasty and maintains the standards of nutrition that are prescribed by the Centre. This is completely uncalled for, surprising and quite objectionable,” she said.