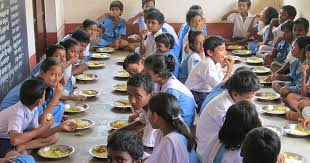 Taken to hospital; doctors have said there is no cause for concern

The teacher in the school rushed all the 25 students to a private hospital. Doctors have said that all the children are fine and there is no cause for concern.

The midday meals are supplied by International Society for Krishna Consciousness’s subsidiary Akshaya Patra Foundation (APF). The students were served puliyogere and rava payasa on Monday.

Officials of the Department of Public Instruction said six students vomited twice. They were kept under observation before being discharged in the evening.

“After lunch, the students were playing on the ground. One child vomited, followed by the other children. However, doctors have told us that there is no reason to panic,” an official said.

The department has initiated an inquiry.

APF has run into loggerheads with the government after refusing to include onion and garlic in the meals. The State government has not yet signed the Memorandum of Understanding to continue the programme with APF that supplies food to 4.49 lakh students in government and aided schools.

Officials from the APF stated that the food is cooked in batches, and students from surrounding schools who were given food from the same batch did not have any complaints.

The Foundation, in a press statement, said samples of the food had been sent for testing as part of the investigation. “We have not received any complaint of children taking ill after consuming the food supplied by us from other schools on the same route, or any of the 1,002 beneficiary schools in the city. The meals served to this school were cooked at our centralised unit at Vasanthapura. All our centralised kitchens follow high standards of hygiene, food safety and quality to ensure that nutritious food is cooked and delivered to the beneficiaries.”